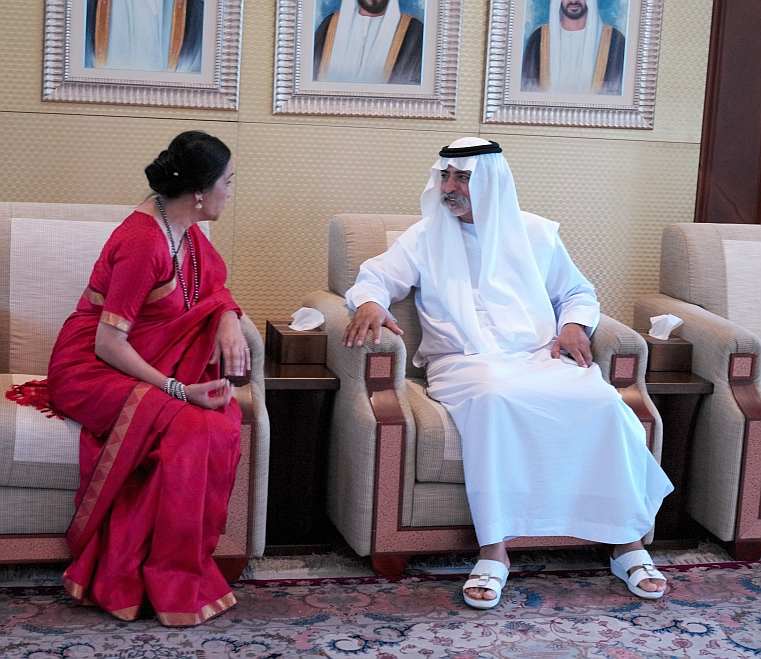 It has been an amazing journey to come to Abu Dhabi. We landed on August 19th night in Dubai and were whisked away on the 20th at 9 am to Abu Dhabi by Author and Columnist Pranay Gupte, http://www.pranaygupte.com, for an audience with His Highness Sheikh Nahyan. 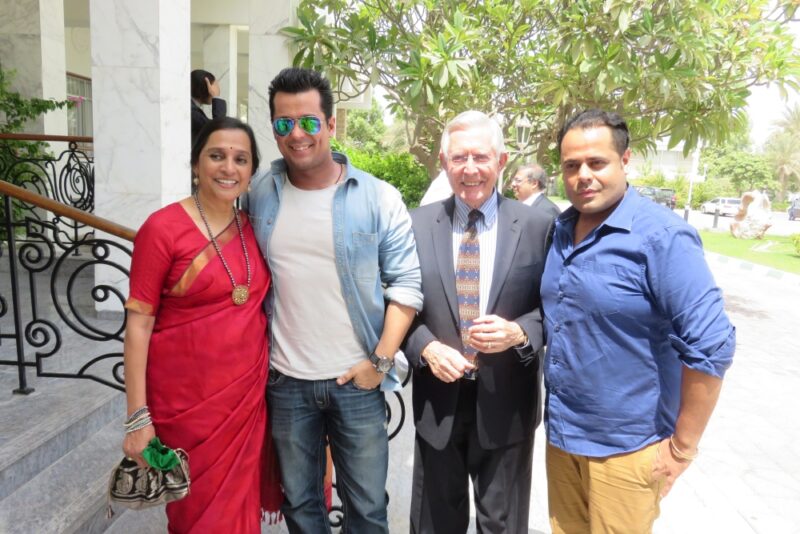 We got to Abu Dhabi around 11.15 am and were met by His Royal Highness’s secretary, who else but “Mohammad”. Got seated at 11.30 and I was given the seat of honor to the right of His Highness Sheikh Nahyan. 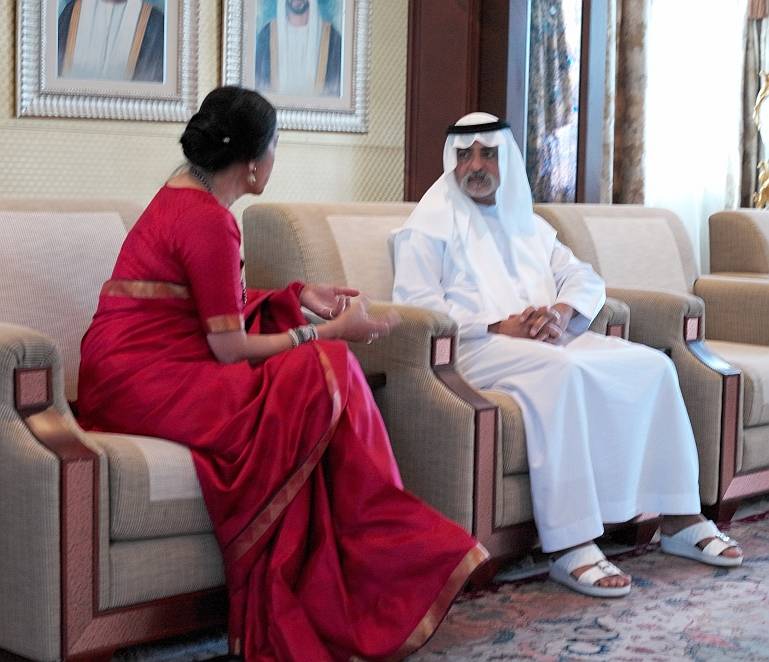 I expected to spend 20 minutes with His Highness and ended up talking with him for over 3.5 hours!  As it turned out there were 40 people in the room whom he had to see and other than greeting them officially, he spent the whole time discussing issues with me.  I was blown away. I didn’t want to overstay my welcome, but Pranay kept telling me to hang in there as long as he didn’t finish with me, and I did!

I had understood that lunch was planned to be “Ladies Only”, with Her Highness and her three daughters (Sheikhas). Plans changed unexpectedly. Instead, after prayers attended by the male invitees, I was invited to enter the banquet room and was again seated next to HH Sheikh Nahyan. I was a bit taken aback when I realized I was the only female in the room.  He personally filled my plate and asked that  they bring a “vegetarian” plate for him as well. 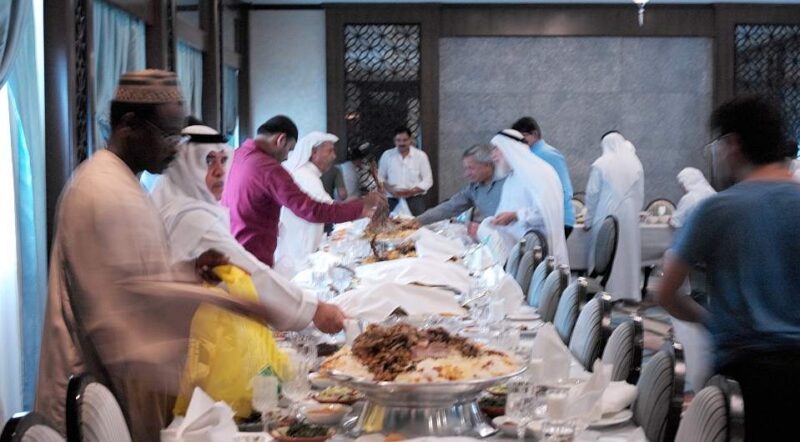 During the lunch I listened attentively to everything – how the Cleveland Clinic had set up a major hospital in Abu Dhabi in 90 days and performed the first heart transplant, then about how they hoped to have a lot more women in administrative ranks in the Government and where they were heading with the plans for the future.  India’s Prime Minister, Mr. Modi had just been there the prior weekend to address an audience of over 30,000 people.  I listened as HH talked fondly of that meeting and welcomed me as both an Indian and as an American! 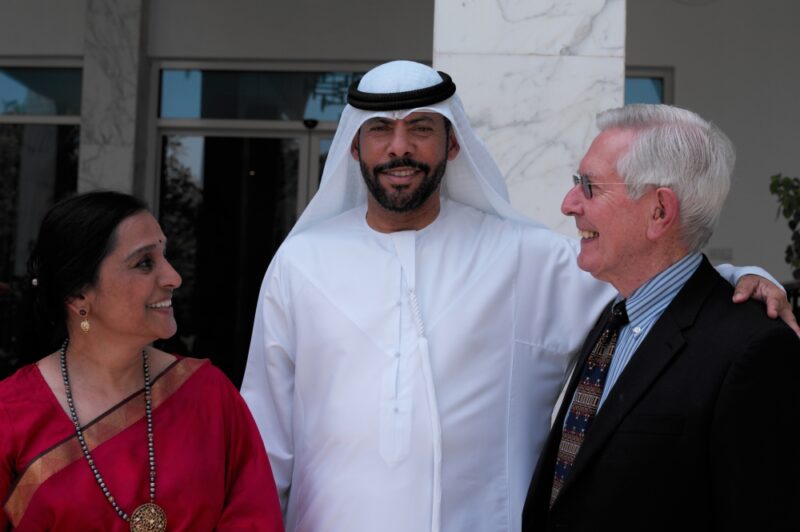 When it was my turn to talk, I asked if he would like me to send a proposal on further enhancing women’s status in UAE and how I entered the entrepreneurial ranks, balancing the two very diverse cultures of East and West.   He asked me to send the proposal to him and he would personally look into getting it to the right source. 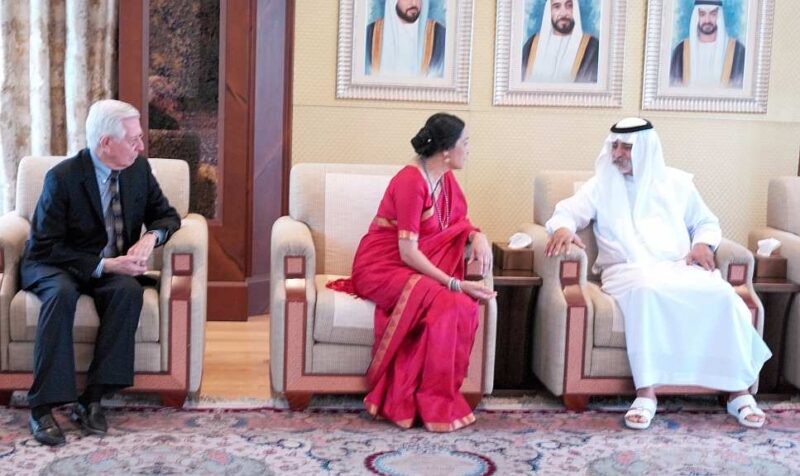 After lunch we all went back to the main hall where he held court.  I was seated to his right and my husband Edward Messerly sat next to me.  Tea of different flavors and coffee were served.  He had the CEO of the Cleveland Clinic of Dubai on the other side of him and a Bollywood actor called Vikram Singh sat next to Edward. I proudly introduced the subject of WPO, its accomplishment and how enabling it has been in my growth internationally. 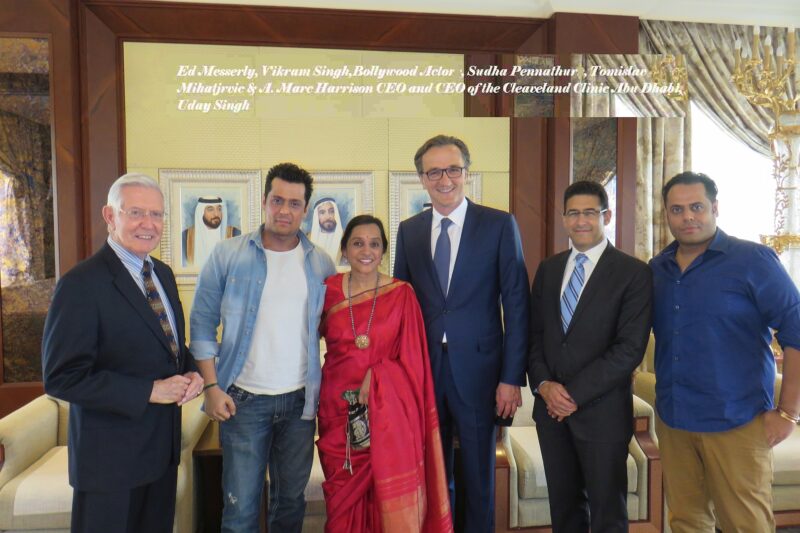