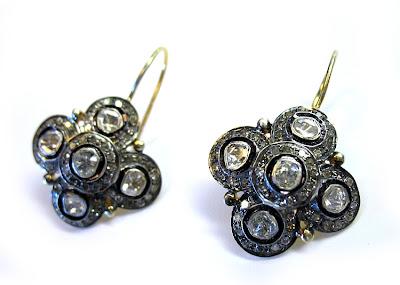 Until the late Middle Ages, diamonds were most prized in their natural octahedral state.. Around 1300, the flow of diamonds into Europe increased via Venice’s trade network, with most flowing through the low country ports of Bruges, Antwerp, and Amsterdam. During this time, the taboo against cutting diamonds into gem shapes, which was established over 1,000 years earlier in the traditions of India, ended allowing the development of diamond cutting technology to begin in earnest.

The Indians associated diamonds with divinity. The first Indian diamond jewelry was created for the purpose of decorating religious icons. According to Indian religious heritage diamonds were believed to be bearer of good fortune. Diamonds were considered to be so powerful and precious that the ownership of diamonds was actually controlled. Every caste was restricted to own specific colors of diamonds. Only the ruling king of the time was allowed to possess diamonds in all colors. This goes to show how exclusive diamonds were considered to be amongst the Indians.

The earliest recorded reference concerning Indian diamond jewelry has been found in a Sanskrit text known as “Arthashastra”. This was a historical Buddhist text dating back to 296 BCE.

Victorian jewelry is known for its exquisite ornate detail, often having laborious pave diamond settings or detailed filigree designs. The diamonds used in rose-cut jewelry or Polki jewelry are evaluated or graded in pretty much the same way as a regular round brilliant cut diamonds barring the last C which is for ‘Cut’.

More on how I have developed the designs for the contemporary woman in my next blog.