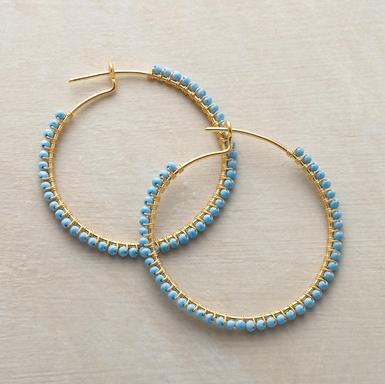 Don’t these get you in the mood for summer?

or how about these:

get ’em while you still can…
at Sundance.com 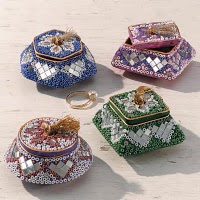 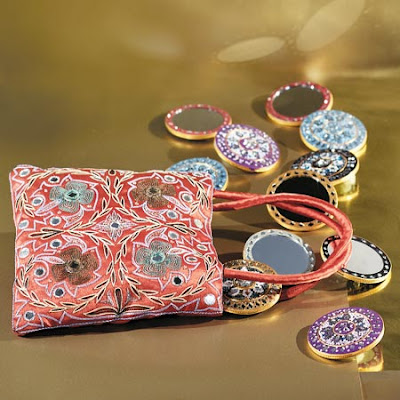 I have long been fascinated with the exquisitely handcrafted lacquer and gemstone Meenakari by jewelers in Jaipur, India. I first introduced this “Meenakari” enameling technique over lacquer on gold and silver jewelry. 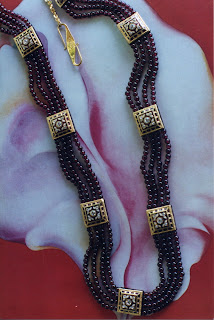 The necklace from Designs by Sudha is strung with garnets and mina chowkies” squares, and has been a signature piece in my collection. The process is laborious. A piece is fixed on a stick of lacquer and delicate floral designs engraved on it . Engravings are made in the groves and the enamel colors filled in with the delicacy of a miniature paintings. ‘Kundan’ and mina are part of great jewelry heritage of India.

In decorative arts, I introduced lacquer with mirrors during Diwali, the festival of lights in India some 26 years ago! I saw bangles being made in the streets of old Jaipur city on a street called “chudion ka rastha”. Literally translated means “street of bangles” where all the lac bangle makers sit in a row over hot flames crafting these lovely adornments. In the night when fireworks were resplendent, all the lac studded with mirrors reflected the light and were splendorous! 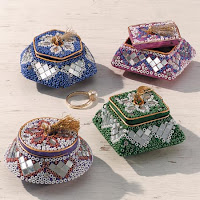 colorful? From the bangles, an idea evolved from “ Designs by Sudha” of lac pocket mirrors reflecting the festival of lights, trinket boxes to hold your do-dads, mini frames for the dresser,

lacquer handcrafted votives which had replaceable wax to make it more sustainable, lac ball ornaments for Christmas which were glitzy, lacquer pens with replaceable ink refills.

All these pieces in my handicraft collection have become sustainable, timeless treasures of art. 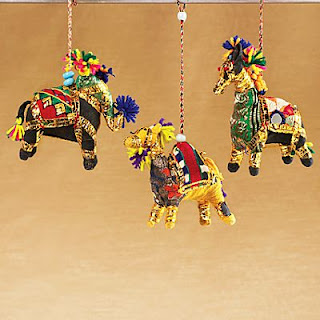 In my world of unique crafts, “Ornaments” are small decorative objects for the Christmas tree and “Adornments” is jewelry used to beautify oneself, whether it be a necklace, a bracelet, ring or a pair of earrings. Designs by Sudha is in the business of both these types of ornamentation’s and adornments.

This year these have taken on an interesting twist. Customers who 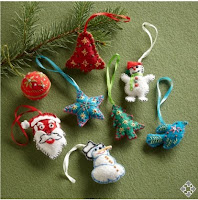 loved gold and glitz in their Christmas ornaments have turned to bright jewel tone colors. Fun stuffed animal ornaments made by gypsy craftsmen, hand painted papier mache animals from Kashmir, beaded birds and snowflakes from Agra have been the top choices of retailers. The traditional gold and silver has taken second place to the jewel tone ornaments. Skirts and stockings too have become more colorful with reds and golds with pearls.

Similarly with the price of metals going through the roof this year, I have focused on jewelry with more semi-precious stones and gold plating on silver (vermeil), and less on the pure precious metals. Diamonds once only set in gold are now being set using “polki diamonds” (these are uncut diamonds and very popular in the days of the Maharajas) , set in sterling silver with just accents of 14K gold in the bezel and 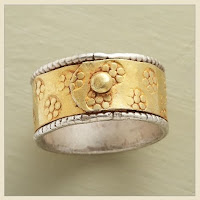 backing. We will see a lot more of these interesting mixtures of metals and stones in my line this fall.

Pearls have become a girl’s best friend
and is featured throughout my line of jewelry and is a jewel of choice my museum catalogs.

Next week I will be featuring the art of lacquer in all areas of decorative handicrafts. 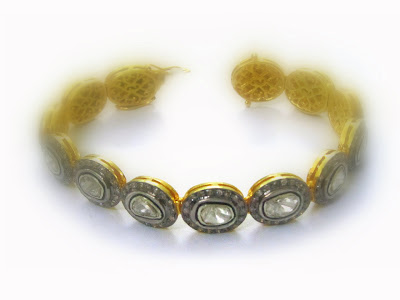 We arrived in Edinburgh, Scotland by train from London on June 2nd to warm sunny weather. Taking a quick glance at the inventions Scotland has gifted to the world it is no wonder they exclaim “Great Scot” when there is wonderment. Many of the products we use today were invented here!

Engineer and inventor John Logie Baird was the father of television and later developed ideas such as color, 3D and large screen TV. He was also the first to patent fibre-optics, the technology now used to carry telephone calls and Internet traffic. It was, of course, Edinburgh-born Alexander Graham Bell who invented the device in 1876.

Less celebrated, but just as influential are Scots figures James Chalmers who invented the adhesive postage stamp; Sir James Dewar, who created the vacuum flask, and Robert William Thomson who invented the vulcanized rubber pneumatic tyre in 1845, the fountain pen in 1849 and a steam traction engine in 1867. Unfortunately, he abandoned his idea for the pneumatic tire over fears it would be too expensive to produce, and it was only rescued in 1888 by his fellow countryman John Boyd Dunlop. A similar fate befell the unfortunate Kirkpatrick Macmillan, who first invented the bicycle. However, he failed to patent his invention and it was widely copied.

Sir Thomas Lipton is credited with revolutionizing the retail grocery trade, buying, for example, tea plantations in Sri Lanka . He developed many of the marketing techniques employed by supermarkets today, and also, additionally, established the World Cup for soccer in 1910.

Another famous economist Adam Smith is now known as the father of political economy was from here. Famously, Scotland was the first country in the world to use the banknote.When I heard that the automated teller machine (ATM) was also developed in Scotland I was blown away.

We saw several museums including the National Gallery in Edinburgh, 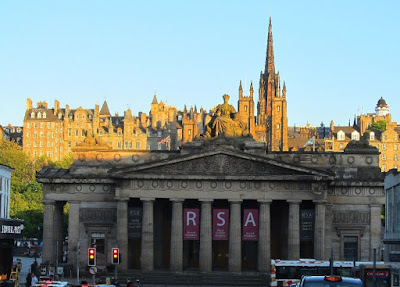 the Castle and Queen Elizabeth’s summer home called. All of them had well developed Museum gift shops with hordes of tourists! Interesting assortments of jewellery, ties, mugs and the usual memorabilia.

Personally the best shopping in Scotland was for Cashmere. It comes in one-ply and two-ply garments and accessories. (2 –ply being heavier and more expensive). One needs to be careful with the quality since much has been mixed with lamb’s wool, but could be labeled as 100% Cashmere. The best place to shop is directly with the factories in Hawick (pronounced Hoyk). “Hawick Cashmere of Scotland” is where Ed ordered a wonderful vest in 2 ply Cashmere. Johnston which has a shop in St. Andrews also has some wonderful sweaters.

We also discovered a great boutique with unique knitted jackets and sweaters in silk and wool. He had several one-offs. 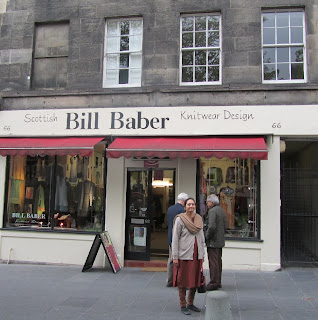 The other thing they are famous for is Scotch whiskey. There is a tasting room and a Museum near the Edinburgh Castle. Being less adventuresome, we however did not indulge in this sport.